If you’ve been wanting to learn how to speak Wingdings, you’ve come to the right place! We love Wingdings because it allows us to communicate in a language only we can understand, and keep our secrets safe!

The best part of understanding Wingdings is that you can share hidden messages that most people won’t know how to crack. Here’s a Wingdings Guide to get you started reading and writing Wingdings.

How to Learn Wingdings

Today you will learn how to say “hi” in Wingdings and how to read Wingdings with a simple but helpful translation chart. We will include other useful Wingdings charts that you can use to practice.

There are two basic methods to type in Wingdings: 1. Cipher and deciphering. 2. Emoji-style.

A cipher is a system that replaces each letter in a word with another letter. In a basic cipher, each letter is always replaced with the same letter throughout the message The first step to creating most codes is creating a cipher.

For this, you need to learn which Wingdings character corresponds to each character of the English language. If you are a beginner, you can use the help of a Wingdings to English Translator. Simply type a letter and it will show you the equivalent Wingdings icon on the other side.

Now that you are typing Wingdings by matching up the letters and numbers to correspond with different letters and numbers, you’ll be able to encode whatever you’re writing about. Whether you’re dishing on your crush or writing your latest journal entry, your secrets will always be safe. To the untrained eye, your message will look like a scrambled mess that doesn’t make sense. But give someone your special key, and they’ll be able to decode your message and read all your innermost thoughts.

How to Say hi in Wingdings

Translating English to Wingdings character by character shows us that “hi” is translated as two astrological symbols: Aquarius and Pisces.

Why are there astrological signs in Wingdings? Because the Wingdings font came into use with printers to enable all the printing elements that weren’t letters or numerals. In the early 90s, it wasn’t possible to embed images into documents (and emojis didn’t exist yet), so the Wingdings font was a simple way to get common graphic icons into printed paper. The astrology symbols were typically used in printed horoscopes such as newspapers or magazines.

How to use Wingdings: Practice!

Now that you know the basics, it’s time for you to practice. Then you will be able to memorize which Wingdings character corresponds to each letter. Here are some keyboard maps that will help you get familiar with the layout of Wingdings:

Emojis used in combination take the place of whole sentences. You can use a single emoji or Wingdings symbol in a similar way to nicknames or slang, as a handy shortcut to what they mean, which through consistent use creates an intimate ‘secret language’ others don’t understand. Here’s an example of how to write in Wingdings using fewer icons to convey a longer message:

Wingdings symbols, just like emojis, can be being used to construct secret messages that allow personalized communication between colleagues, friends and family members. Often this is about more than just typing something more quickly: people found that by using emoji they could convey very complex meanings and thoughts with them that could not be described in words.

Here’s how you can say “hello” using only two Wingdings characters, instead of translating into five letters: ☟♏●●□

You only need a smiley Wingdings face and an open hand to say hello. The only drawback of this method is that one symbol can mean several different things, so context is very important.

Use of Wingdings in Popular Culture

Wingdings became a cultural phenomenon because people used this typeface in a different way than it was conceived. While it was intended to adorn and communicate in combination with text, people found another use for it. Since each symbol was associated with a key on the keyboard, people began to associate each letter with a symbol. Everyone wanted to see what his name meant in Wingdings and conspiracy theories were even born about the typeface and the results it displayed with certain words, implying that it contained hidden messages.

Fortunately or unfortunately, precisely these theories made Wingdings a cultural phenomenon and popularized among computer users of the 90s and early 21st century. Microsoft later added more and more symbols to its particular typeface. Derivations such as Webdings also emerged, intended to be used on web pages and for browsers to be able to read it. Did you know that a popular videogame character speaks only in Wingdings?

Communicating through symbols is something typical of the human being. To go back we can go back to prehistory to find the first expressions in symbols. In fact, it is the origin of the writing that we know today. Today’s alphabets are derived from symbols previously used to express concepts and objects.

Today neither the dingbats nor Wingdings nor any of these varieties have the presence that they had before. Instead we have adopted emojis, which are not characters as such but the end result for the user is the same. 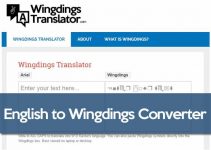 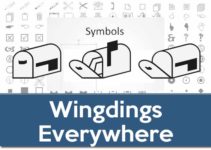 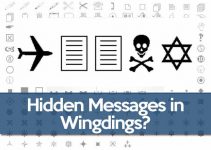